After he disappointment of losing the 2002 Intermediate Final by a point (2-10 to 0-15) we approached 2003 with something of a hangover, and our heart didn’t appear to be in it for the first half of the championship season. We were not firing on all cylinders and there was crankiness about the panel that did not bode well for the season. We were going through the motions but it seemed our hearts weren’t fully in it.

First day out we played St Croans. “Dour, hard hitting and scrappy” was how the” Champion” reported it and it was a fair summary. We won the game by a point, 1-6 to 0-8, and were lucky enough to do so. The goal was an attempt for a point by Brian Higgins, which dipped and the goalie got a hand to it, but it landed in the net. It was that kind of day.

The next day out we played St Ronans, and in another sub standard performance we just about got away with a draw (1-9) each. We had a good ‘heart to heart’ before the replay and things certainly picked up from there on. We won the replay convincingly in Kilmore by (0-15) to 0-7 and played our best football of the season so far. We were through to a county semi-final and we were beginning to believe again.

St Dominics provided the opposition in the semi-final. St Dominics had been newly promoted from junior football and they found the going too tough for them. Stuart Roddy had re-discovered his “mojo” and he was a constant thorn in their sides, contributing 1-3 from play. Paddy O’Connor and Dermot Neary patrolled the centre of our defence with ease, Higgins was busy throughout at midfield and the forwards took enough of their chances to win comfortably 1-10 to 0-4.

And so we were back in another final, a year older, a year wiser and impatientt to get back to senior football. Our opponents would be St Croans, who we had beaten in the first round by one point and we knew that they would present a stern challenge. The injuries that had plagued us all year had cleared up and even a heavily strapped Paddy O’Connor was able to take his place at full back, and we were well prepared for the game.

It was a close game but we were always in control and had a small scoring advantage throughout. Brian Higgins came up trumps at midfield and Brendan Rock, Micheal Travers and Rossa O’ Callaghan directed some wonderful scores over the bar, while John Horan added three crucial frees in the last ten minutes. At the other end Paul Staunton directed operations from goals, while the backs gave little room to St Croans to express themselves. We won by three points 0-11 to 0-8, and joy was unconfined in Castlerea, as we celebrated an over-due return to the top table. 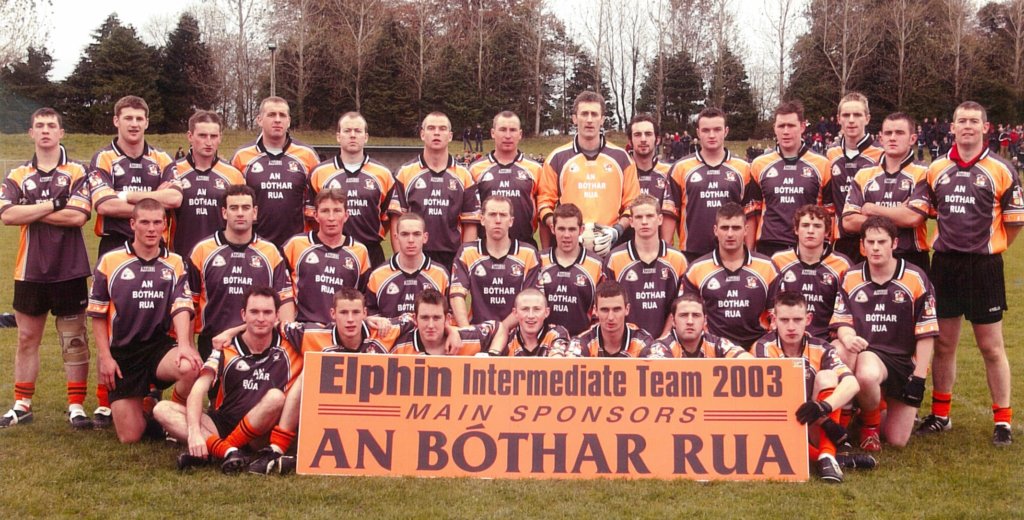 We now also realised that this was to be the first year of a Connacht and All-Ireland intermediate club competition so we would have a chance to parade our talents on an even bigger stage in the new year. In the semi-final we defeated Louisburgh of Mayo in the semi–final in Orchard Park, and qualified for the final to meet Cortoon Shamrocks of Galway, also in Orchard Park.

A feature of the game was the marking job done on Cortoon’s danger man Derek Savage by Brendan Neary. Elphin always had a slight edge in this game and when Colm Rock intercepted a Cortoon side- line ball and passed to Stuart Roddy whose cross goal shot was slotted home by Patrick Fox, it was game set and match to Elphin. The final score was 1-8 to 0-8

It was a wonderful achievement to win the Connacht title and receive the Gene Byrne cup, called after one of our own. The fact that a number of the county final team members were missing for a variety of reasons added to the achievement.