After several years of fundraising, planning, and development the “new” Orchard Park was officially re-opened on April 1st, 1991. We marked the 30th anniversary by planting an apple tree and took the opportunity to look back on the redevelopment, speaking to some of those involved. The articles below look at why it was redeveloped, how the work was completed and what the re-opening weekend looked like.

Next time you stand behind the ball alley goals to retrieve the footballs that elude the great big nets or you are on your way to the Stand having entered the park by the old dressing room gate, pause for a few moments and study the ground you are standing on. Then look yonder towards the opposite goals at the town end and at the small Orchard beyond. The difference in ground levels is approximately 15 feet or 5 yards or 5 metres in parts. So to all of you who were too young to remember that the “old” Orchard Park had a hill that ran from the bottom goals up towards the ball alley with a 5-metre rise, here is a short story. The slope on the old pitch was a major factor in the amount of effort it took to play up “against” the hill. If you were unfortunate enough to be unfit for a tough second half and you had to play up against the hill…well God help you or even worse if there was a north wind blowing and you had to play against the hill and the wind and you were unfit and the field was wet and your feet were heavy, well it could be a torturous time. On the other hand if you had weathered the first half playing up the hill, having the advantage of playing down the hill in the second half could set you up for victory. Not alone did it take more effort to run up the hill, but kicking the ball up the Hill took much more effort and the ball might drop short by two or three yards or more.

I was about 16 when I first heard mention of the possibility of levelling the Orchard Park. There was some skepticism about the idea. Perhaps having had a slope on the Orchard since the old apple trees had been dug out, people had grown attached to the feature. Also, it gave some advantage to the home team.
In about 1979 or 1980 I heard it said that Joe Brady had a mad idea that the Orchard could be levelled. It was possibly mentioned over the decades when there was much porter drank or for a source of conversation similar to how we might currently travel to Mars or win a Roscommon county senior title! To get back to my story sometime in the following few years I was in Joe Brady’s company at the bottom ‘town’ goals end and he explained the various options which might be considered to achieve a level playing surface – “Cut and fill” was one option i.e. you slice away the soil on the top half and fill in that same soil to the lower half. Quickly the proposal seemed plausible. Our senior Goalkeeper, Kieran Jordan was at the time a young civil engineer. He set about taking readings of the levels and calculations as to how much cutting away of the hill and how much filling of the lower end would be required. Under (AOB) “Any Other Business” at the end of a club meeting Kieran Jordan gave a report of his surveys and calculations. With his impressive matter of fact delivery the dream of a level Orchard Park came alive in our minds. Joe Brady’s idea was not so preposterous at all. We came to visualise a level playing field.
Like all great achievements, it started with a dream. A far-fetched idea. A little acorn that grew into a majestic Oak. I will never cease to wonder at what was achieved when we grasped the idea and had the courage and persistence to see it through. Within a short few years, a series of incredible fundraising projects were completed and Neary Brother’s excavators and bulldozers were executing the chosen “cut and fill” method.
I recall the pitch opening weekend. The senior club match. The second half versus our guests, the Tara senior GAA team from London, and being conscious of what a difference it was to play on a level field.
Congratulations to the Gaels of Elphin and to all who went before us. After all, it’s been a series of improvements since the Walled Garden (with hundreds of apple trees) was granted to Elphin GAA by Arthur O’Connor over 100 years ago.

Since that great weekend 30 years ago the improvements have continued. To mention just some, the new Dressing Rooms were built and the extra land for the Small Orchard was acquired, and very importantly the second pitch was installed. Great strides were executed by many energetic men and women. A lot done …and more to do.
Just to mention the thousands of young footballers who played in the Orchard and who never had the thought of a hill enter their heads.
Now, who mentioned a county senior title!!! 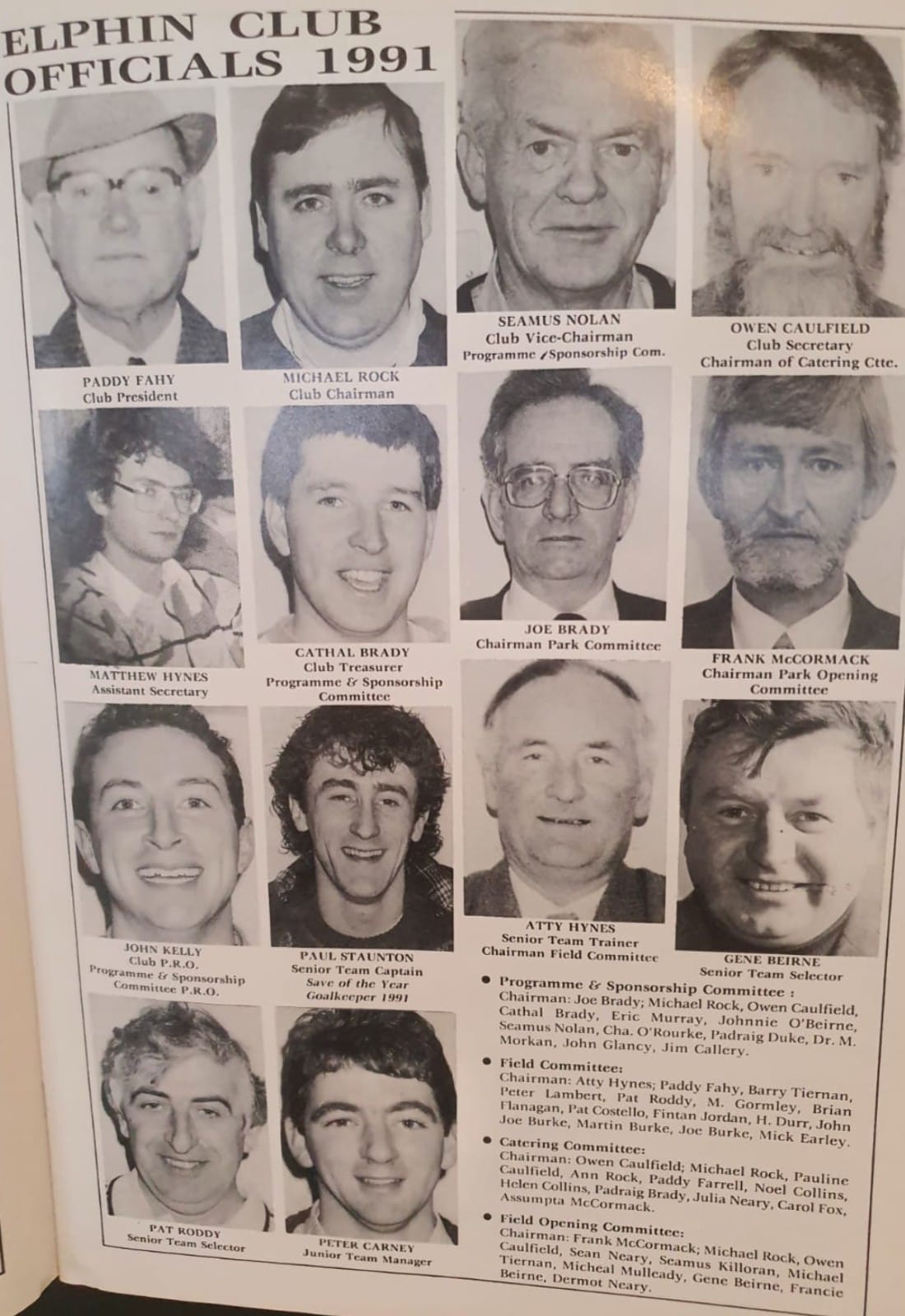 The reconfiguration of the Orchard Park.

During the early years of the GAA the Orchard Park provided one of the few match venues for the playing of our games within County Roscommon and indeed Connacht.

During the decades from 1960 onwards other clubs developed pitches and little was done with the Orchard. At the toss of the coin before a game to decide what end of the pitch to defend, ‘against the hill or with it’ became the issue. There was a fall of 3.5 mts from the alley to the town end of the pitch.

In 1989 the club decided to level the pitch lowering the alley end by 1.5 mts and building up the town end by a similar height leaving a fall of .5 mt for drainage. On the advice of the then County Chairman, Michael O’Callaghan, (R.I.P.) Elphin decided to build a ‘sand pitch’, the first in Connaught. Local contractors, Nearys, were awarded the contract at a cost of £35,000.

This work entailed rotavation, stripping, and stacking the topsoil off the pitch area. Next came the dig out and carting of the subsoil, laying drains, and filling with stone. The entire pitch was ripped at 1.2 mts spacings, first from the alley to the town end and then across the field from the Stand out to the road sideline. This work was the most important feature of the drainage programme and the entire pitch was thus raised by 150mm. The topsoil was now spread across the field and mini-trenches of 300mm x 150mm were laid and filled with stone while being ripped again. (See Pics.) All stones greater than a pea size were picked.
Sand of uniform grain size was procured at Gurteen, drawn to Elphin and a 100mm deep carpet of sand was rolled out. A girder, 12 metres long, was fixed to the bulldozer blade and used as a straight edge to achieve a perfectly level surface. Any stone, greater than the pea referred to, was again removed.
The field was then seeded down in June 1990 and subsequent grass was mown about four times before the end of the year with the opening on 1st April 1991. 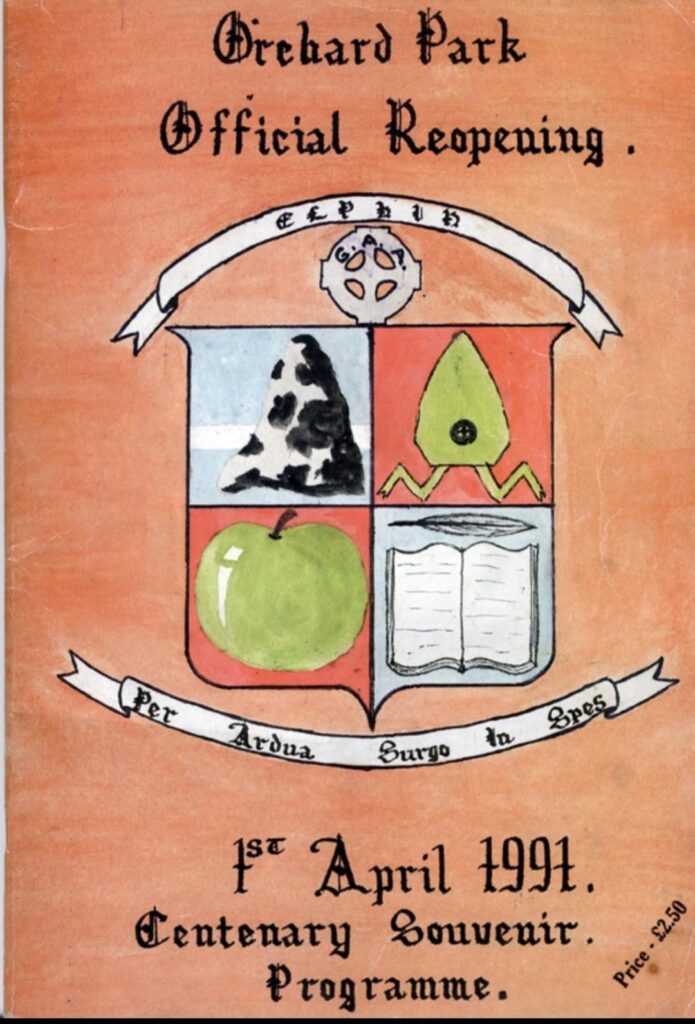 It is said that time waits for no one and it is so true in the case of the park re-opening. Many of the club members that worked on the project are no longer with us and many of the present Club Executive are too young to remember the event so in that respect I am indeed lucky to be still standing!
In the old days Elphin Orchard was the venue for many community events such as Elphin Agriculture Show, show jumping, circus marquee, dancing, and parish sports to mention but a few. All of these events took its toll on the pitch and no doubt this is why the club decided to install an all-weather “Prunty” pitch!
Pride of place must go to the “Field Committee” for undertaking the project and for the club for raising the necessary funds. The weekend of the opening was a busy one with all hands-on deck, with the whole community getting involved. I was a member of the catering committee for the banquet in the social centre where close on 400 people were provided with a sit-down meal.
Benny O’Connell, then of the Percy French, was in charge of food with the help of the ever-present Ladies Committee. Many people donated gas cookers for the supper room and a bar was in the main hall doing a brisk trade courtesy of Christina Glancy’s licence. Many sporting events took place in the Park on the Saturday and Sunday.
On Monday, for the reopening day, the Artane boys band arrived and the late Aiden Brady RIP officially opened the pitch. This was followed by challenge games – Roscommon V Armagh in football and Galway V Kilkenny in hurling.
One memory I have was that a monsoon arrived, a downpour of rain all day but that did not dampen our sports as we all stood very proud that weekend. We were proud of our new facilities and to be from Elphin.