Elphin GAA Club is one of the oldest in the country. It is reasonably certain that it was formed in April 1888. Following the formation of the first Co. Board in Boyle in January 1889, Elphin was one of eighteen clubs affiliated and it was continued as a club to the present day. Indeed, according to a strongly held belief, Michael Kelly club secretary for many years, was one of number of Roscommon men to attend the first famous meeting in Thurles in 1884.

From 1888 to 1906 the Elphin team was known as the William O`Brien’s. He was the famous M.P. and editor of ‘United Ireland’. The William O’Briens was the leading team in the country in that period and won five finals in a row from 1901-1906. They represented Connacht in Jones’s Road in 1906 defeating Monaghan, the Ulster champions, but lost the final, at the ‘Market’s Field’ in Limerick to none other than Kerry. During the following two decades success on the field was very limited but “The Orchard” was acquired and opened as one of the first G.A.A. pitches in the county, in 1916.
From 1927 to 1937 another Elphin team, “The All Blacks” became the best team in the county. Having won the Junior Title in 1927, they won the Senior title 1931, 1932 and 1937. Their title from the colour of their jerseys, which were black only. There are two reasons given why they changed from their original green and gold: one that there was not enough money to buy a two-tone jersey and that “The All Blacks” of New Zealand Fame were touring here in 1927, and so the black strip.
It is not widely known that Elphin won a Senior Hurling title in 1925, though the final was played in 1926.
Lean times followed once again until a Junior championship win in 1945 and a Minor championship in 1948 formed the basis of what was known as the “1950`s team”.The period from 1948 to 1961 was a `Golden Age` for Elphin at senior level as the club contested all but 2 county finals. This team won five senior championships, 1950 and ‘51 and three in a row in 1955, ‘56 and ‘57. This team broke up after the 1961 defeat in the county final to Clann na nGael.

The senior team struggled in the championship through the 1960`s ,with many first round exits, but did contest the 1966 county final, again losing to Clan na nGael. However, poor results continued in the following years, resulting in relegation to intermediate ranks in 1972.

Things slowly improved through the 1970`s. The under 12`s won their championship in 1971. The under 14 team contested the `73 final and then won the `74 county u14 title. In `76 the senior team won the intermediate league, which meant league football in the senior ranks but not the championship. 1977 was a great year for the under-age teams. The under 14`s again won the county final, as did the minor team. The minors also contested the All-Ireland 7 a side final, losing to Tullamore. Finally, after nearly a decade in the lower ranks, Elphin finally won the Intermediate championship in 1979.

The 1980`s began with more under-age success. The under 12 team winning the county final in `80 and the under 21`s winning their championship in `81. Our senior team reached the 1986 county final, 20 years after the last appearance in one. Again it was Clann na nGael who beat us. This was a great Clan team that contested no fewer than 5 all ireland finals during this decade.

The beginning of the new decade saw the reopening of the Orchard Park after some major redevelopment to the pitch making it an all weather surface. The `86 senior team broke up in the early 1990`s and again the team struggled to maintain its senior status. In 1994 we were relegated to the O`Gara Cup but managed to come back up the following year beating Western Gaels in the `95 league final. However the slide continued and the team was relegated to the intermediate championship in 1998 and back to the O`Gara cup in `99. But things at underage level were looking much brighter with a lot of hard work put in. The under 12`s won the `95 county final, the under 14`s the `97 title and the minors won the `99 Div. 2 final.

The new century started in great style with the senior team returning to the senior league by winning the 2000 O`Gara Cup and the minors winning our 1st Division 1 minor title for 23 years. The seniors also returned to the senior championship ranks in `03. Having lost to St. Faithleach`s in the `02 intermediate final by a point, we beat St. Croans in the following years decider.
2003 was one of the clubs most successful years in recent times and resulted in Elphin being named Roscommon Club of the year. Not only did we win the intermediate county title, but 2003/04 also saw us capture the inaugural Connacht Intermediate championship, beating Louisburgh of Mayo in the semi final and Cortoon Shamrocks of Galway in the final. We bowed out in the All Ireland semi-final losing narrowly to Ilen Rovers of Cork, who went on to easily win the final against a strong St. Michaels of Donegal. 2003 also saw our minors do the 1st division league and championship double.Our best performance to date since returning to senior ranks was a semi-final in 2005, when we were defeated by Padraig Pearses in a replay. Pearses scoring a goal late into injury time to win by 1 point.
This decade has seen huge success at minor level. As mentioned already, our minors won the 2000 and 2003 championships. They were also runners up in `01, but won the league, were championship semi-finalists in `02, winners in `04 and winners of the never to be forgotten `06 final v Clann na nGael when the lads
came back from 6 points down to score 3-1 in injury time and win by 4 points!
2008 saw our Minors capture their 6th County title in 10 years when they defeated St. Aidans in the division 2 decider. Our Under 21`s also reached the division 1 final losing to St. Brigid`s who collected their 7th title in a row.

2010 was the culmination of many years of hard work by players, coaches and all associated with the Club when the Senior Team reached the County Final after a long absence, where they lost out to a more experienced St. Brigids team. Down, but not out, the players and management regrouped and got back to the final in 2011 – the first time the Club has appeared in back-to-back finals since the 1950’s. Unfortunately St. Brigids took the title again but the team finished the season with some silverware by defeating Strokestown in the Division One League (O’Rourke Cup) Final . In February 2012 the team took the 2011 North Roscommon Senior Football Championship by defeating Western Gaels.

The Club has supplied one G.A.A. President, Dr. Donal Keenan and Dr. Mick Loftus, lived in Elphin for a number of years as a very young boy. All in all, the club can be proud of its contribution to the G.A.A. in the County and in the Country. 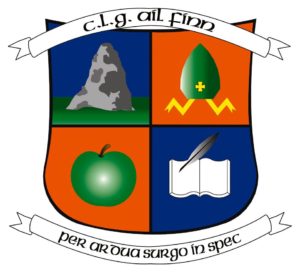 The Elphin GAA Crest is divided into four segments, representing distinct aspects of our heritage. In the top left we have a rock, symbolising “The rock of the clear spring”, which is the translation of the Irish word “Ail Finn”. The Bishop’s Mitre represents the fact that Elphin was the seat of the Bishops of Elphin Diocese for centuries. The Apple represents the Orchard Park, our spiritual home for almost a century, while the quill and parchment represent our connections with Percy French and Oliver Goldsmith who lived in the locality for many years.

We use cookies on our website to give you the most relevant experience by remembering your preferences and repeat visits. By clicking “Accept All”, you consent to the use of ALL the cookies. However, you may visit "Cookie Settings" to provide a controlled consent.
Cookie SettingsAccept All
Manage consent