The Juniors finished their League campaign with a 2-9 to 2-4 win over Creggs in the Orchard on Sunday. Dylan Shanagher, Cormac Beirne, Benny Rock, Darren Lee and Shane Beirne all put in good performances. They take on Oran B away in the Championship on Saturday at 5pm.

To the Elphin-Kilmore U-15 Ladies on defeating Castlerea St Kevins by 6-6 to 2-9 in the Sean Daly Cup Final. 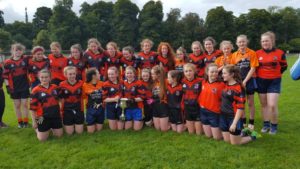 The U-16s take on St Marys Carrick on Shannon in a Challenge this evening (Tuesday) at 6:15pm, in preparation for their County Final against Kilbride on Sunday week.

The Elphin-Ballinameen U-14s suffered a 3-7 to 3-8 defeat to Roscommon Gaels in the last game of the League. They have qualified for the Knock-out stages and may have to play St Aidans.

The U-12 B Team had a comfortable win over Western Gaels B in the Semi-Final of the League. Both U-12 Teams will play their Finals on Saturday week (24th).

Thank you to Boyle for hosting our U-10s in a GoGames Blitz on Saturday. This Saturday the U-10s travel to Strokestown for their Annual Blitz.

There was no winner of the Club Lotto Jackpot. The numbers drawn were 5, 8, 17 and 28. The Lucky Dip winners were Clare Enright; Brendan Fox; Áine McGrath, Dublin and Valerie Byrne. The Jackpot now stands at €8,800 and Saturday’s Draw takes place in Olivers. Play now here .

The September Club Executive Meeting takes place on Thursday at 9pm in the Club Rooms.

Applications are invited for the GAA Higher Education Bursary Scheme. It is open to Third Level Students who have a active part in their Higher Education Club, whether it be as a Player, Coach or Administrator. The Bursary is worth €750 and for full details visit connachtgaa.ie .