A lucky group of Elphin-Ballinameen u12s took part in the half time entertainment in Croke Park on Saturday last taking on a team from Strabane, County Tyrone. Everyone is very proud of these young lads. There handling and skills were excellent and represented the club’s brilliantly. Hopefully this won’t be the last time we see these young men play in Croke Park. The club wishes to thanks to everyone who was involved in organising this for the boys.

The Elphin Ballinameen u14s drew with Western Gaels on a score of 6-7 to 5-10. They play Kilglass/St Barry’s on Thursday next at 8pm in the Orchard.

The U16’s has their first Division 1 match and were beaten by a much Stronger St Brigid’s team. They now face Clan na Gael on Sunday next at 12pm in Johnstown.

The minors are away to St Dominic’s on Thursday evening at 8pm in Knockcroghery.

Well done to the team and management of the Junior Bs who won their last group game in the championship against Oran and finished top of the group overall. They play fuerty in the league this Wednesday evening in fuerty at 8pm.

Hard luck to the seniors who were defeated by Western Gaels on Friday evening last in the senior league. The club would also like to wish Nessan Lenahan a speedy recovery.

The 2018 Club Rossie annual draw was due to take place on July 9th but has been rescheduled. Club Rossie is the main income generator for our county teams and is a vital support to the work been done at all levels in Roscommon GAA. We urge anyone who can to become a member, Gold Membership costs €230 per year & Bronze €100. Membership, which includes entry to the draw, can be purchased/renewed online (www.clubrossie.ie) or by cheque/cash by contacting Eric Murray on 086 8276895 or Coman Brady on 086 6091106. Over the coming days we will be in touch with everyone from the club who purchased tickets last year. 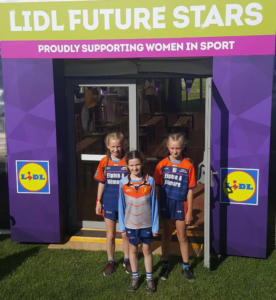 Congratulations to Sarah Jane Travers, Emma Higgins and Katelyn Travers who were selected to participate in the Lidl Future Stars event in Letterkenny last weekend. The girls got to spend the day training with Ladies Gaelic football stars along with 100’s of other children from across the country.

Our U10’s played Strokestown in the Orchard last Thursday evening in the Roscommon Ladies Summer Games 2018. It was a very enjoyable game to watch with great skill displayed on both sides. Next round of the games is a blitz evening Tuesday in Ballinameen where our U8’s play Shannon Gaels at 6.45pm and our U10’s play Shannon Gaels and Ballinameen with their first match kicking off at 7.10pm.

Our U14’s play their first Championship game Monday (16th) at home to St. Mary’s Tulsk at 7pm. We wish the girls the best of luck in the Championship.

The club are holding a clothing collection to raise funds for our underage teams. If you wish to donate your old / unwanted clothes simply fill a bag / bags and drop them inside the gates of the Orchard. We have until the end of the month to gather as many bags as possible. Every bag counts!

There was no winner of this week’s lotto jackpot. The numbers drawn were 5, 6, 7 & 12. The Lucky Dips winner’s were John Reynolds, Mary Anderson, Ursula Casserly and Alan & Ann Tiernan. Next week’s Jackpot will be €7,200 and the Draw will be held in the Tower Inn. Entry is just €2, Envelopes are available in local shops or you can play here.