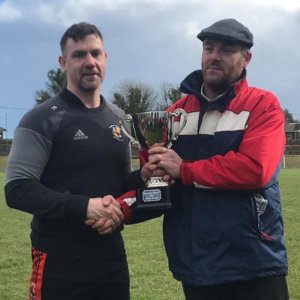 Congratulations and well done to the senior team and management on defeating Strokestown in the Northern Cup Final on Sunday last.
(Photo courtesy of Roscommon GAA Coaching and Games Development)

U16 drew there game against St Michaels. They play Castlerea on Sunday next in the Orchard please come along and support.
Good luck to the 11 u14 players who take part in Friday Night Lights in Strokestown on Friday next.

The Agility, Balance and Coordination (ABC) programme continues this Friday the 15th of March from 6:30 – 7:15pm for 4 and 5 year olds and 7:15 – 8:00pm for 6 and 7 year olds in Elphin Community Centre.
All children in the parishes are welcome to attend. Club registration also available on the night

Our U10’s took part in a county Go Games blitz in St. Faithleach’s, Ballyleague last Saturday in extremely cold conditions. Despite the weather, it was a great day with a great turnout. Thank you to all the parents who came and braved the elements to support the girls. A draw was held afterwards to select 2 teams to represent the county in the U10’s Go Games Activity Day in Croke Park on the 15th April. I am delighted to report that our Elphin Kilmore U10’s were one of the lucky teams chosen for it along with Kilbride.
U8 and U10 trainings take place on Monday’s 6.30 to 7.30pm in the Orchard.

The U16’s played their first Division 1 Championship match Sunday in Elphin against a strong St.Dominics side where they suffered a tough defeat. The game was played in adverse conditions with strong winds, bitter cold temperatures and even some snow. The Elphin Kilmore side played with injuries, illnesses and absences and fought hard but St. Dominics were persistent and came out on top.
Next game away to Eire Óg next Sunday 17th March.

The Senior Sponsor draw takes place on Friday April 5th in An Bothar Rua, if you would like to enter please contact a member of the committee.

We are also having a Social Night on Easter Saturday night in An Bothar Rua. More details to follow.

Well done to our Scor teams who participated in the Connaught Finals on Sunday last, the Quiz team, Recitation and Leiru are all through to the All Ireland finals they take place in the TF Royal, Castlebar on Saturday April 13th. Ticket details to follow.

There was no winner of Sunday’s Club Lotto Jackpot. The number’s drawn were 15, 21, 24 and 28. The Lucky dip winners were Sarah Glancy; James Lynam; Martha Gunn; Hazel Gunn. Entry is just €2, Envelopes are available in local shops or you can play here.

Please support our Sponsors
We use cookies on our website to give you the most relevant experience by remembering your preferences and repeat visits. By clicking “Accept All”, you consent to the use of ALL the cookies. However, you may visit "Cookie Settings" to provide a controlled consent.
Cookie SettingsAccept All
Manage consent