The seniors defeated Castlerea St Kevins on Sunday last on a scoreline of 1.11 to 6 points. They play Kilmore on Saturday evening next in Kilmore at 6pm. The junior’s lost out to Kilglass on Saturday evening last they play St Bridgets on Sunday in the Orchard at 2pm. Best of luck to both teams and management.

Also the U14 panel will be doing a Car Wash this Friday as a fundraiser for FEILE gear it will take place at Murray’s forecourt from 10am-2pm all support greatly appreciated.

The U16’s played in a pulsating encounter in Frenchpark against Western Gaels, last Tuesday eventually prevailing on a scoreline of 3-14 v 3-10 well done team and management. They are up against St Faithleachs Tuesday in Orchard park Elphin at 7pm.

The Minors overcame Boyle in a great contest on Sunday evening last winning on a scoreline of 2.13 to 3.7 in Ballinameen.

The Scór season came to a close last Saturday with the All-Ireland Scór Sinsir Final in Castlebar. Although no titles returned to the Club it was great to have three representatives competing in the Finals. Thank you to everyone who took part in all levels of Scór over the past few months and to everyone who supported the competitors.

There was an extra round added to the U16 league therefore our U16 team got through to the B semi-finals Sunday V Clan na nGael in Kilmore where they were victorious. Elphin Kilmore played a great first half and were leading 2-02 to 0-03 at half time. The second half brought out a fighting Clann side where they brought back the score line and were tied with 2 minutes remaining when a quick point from Chloe Higgins secured the win for Elphin Kilmore. Full time score 2-05 to 1-07. The girls now face Boyle in the B Final , date to be confirmed.

Our U12’s played their 2nd round Northern League match away to Boyle on Sunday where they were defeated by a strong Boyle side. Next game Wednesday away to St. Michael’s at 7pm.

The ladies club are running an Easter Raffle with a lovely Easter hamper up for grabs. Look out for our raffle cards in the shops and pubs around the town. It costs €2 a line and your support is greatly appreciated.

Elphin GAA presents: THE SHOW OF GREATS – it’s our time to shine!

A Lip Sync performance with all of the greats!
Everybody welcome to come along on Saturday evening next for music, fun and laughter in An Bothar Rua kicking off at 8.30pm. Admission on the night will be €10.

We extend sympathy to the Hynes family on the passing of Vera. May she Rest in Peace

There was no Jackpot winner of this weeka lotto the numbers drawn were 2, 6, 13 & 25. The lucky dip winners were Ann Marie Carroll, Kilmore; Aimee Brady, Séamus Killoran and Kelly Evans Neary, Athlone. Next week’s jackpot €11,100 and the Draw will take place in An Bóthar Rua. Entry is just €2, Envelopes are available in local shops or you can play here. 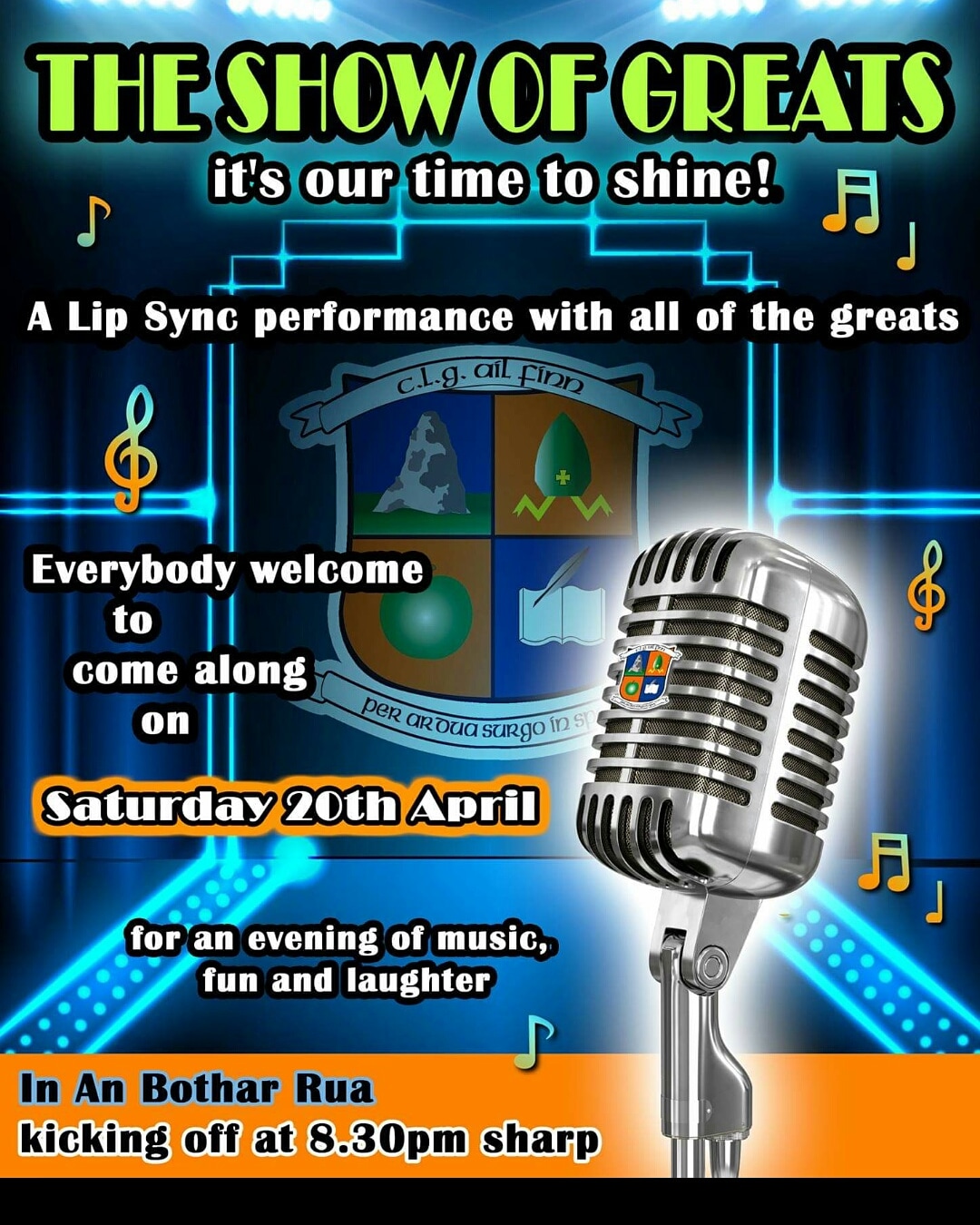 Please support our Sponsors
We use cookies on our website to give you the most relevant experience by remembering your preferences and repeat visits. By clicking “Accept All”, you consent to the use of ALL the cookies. However, you may visit "Cookie Settings" to provide a controlled consent.
Cookie SettingsAccept All
Manage consent